Ranking of the School of Civil Engineering of NTUA (QS 2018) 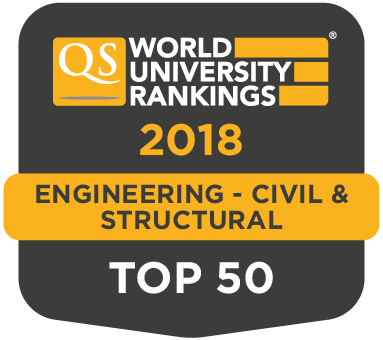 According to the QS World University Rankings by Subject 2018, which was published yesterday, the School of Civil Engineering of the National Technical University of Athens (NTUA, subject: Civil and Structural Engineering) maintains its position despite the dramatic drop in staff and budget over the last eight years. In particular, it remains at position 42, same as in 2017. Similarly, in terms of ranking among European Schools, the School is at position 11 (compared to 12 in 2017). The School has best performance in terms of the recognition of its research work (ranks 23 and 24 in the world for the "Citations per paper" and "H index" criteria, respectively). The Aristotle University of Thessaloniki (AUTH) and the University of Patras are also included in the Civil Engineering lists, at positions 101-150 and 151-200, respectively.

In the relevant QS report, which can be retrieved from the link given below, the universities are classified into 48 subjects and 5 broader subject categories, and the first 50 are listed per subject. In this report, Greece appears twice, one of which is for the School of Civil Engineering of NTUA. (The AUTH appears for the subject of Classical Studies and Ancient History, which was first introduced this year in the list of QS subjects).

In all these subjects NTUA is the first (if not the only one) in Greece. Finally, for the first time, NTUA is also included in the (marginal for NTUA) subject Law and Legal Studies (position 251-300, same as the AUTH and the NDC).